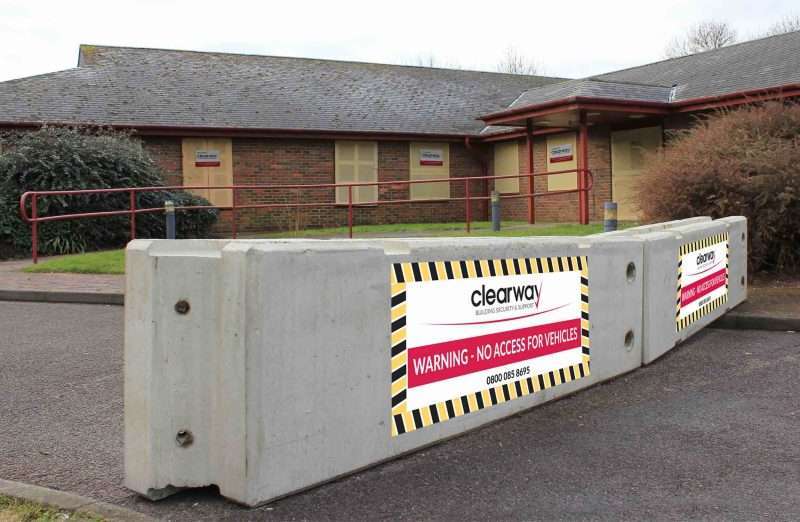 Concrete barrier blocks are a versatile, cost-effective way to create a simple, but extremely robust, perimeter security solution that can be used in a wide variety of applications. Whether needed to secure the perimeter of a vacant property, or control vehicle movement at an outdoor event, or protect a vacant car park or construction site, our concrete barrier hire service is a quick, efficient and cost-effective solution.

Our precast concrete barriers provide an effective way to protect unoccupied car parks, private land areas, construction sites and any other large areas that could be targeted for fly-tipping or unwanted guests. Pre-cast barriers are available in a range of standard sizes from 1.5m up to 3m.

Barriers can be hired short term or long term. We will always try to deliver our concrete barriers within 24 hours of order confirmation. 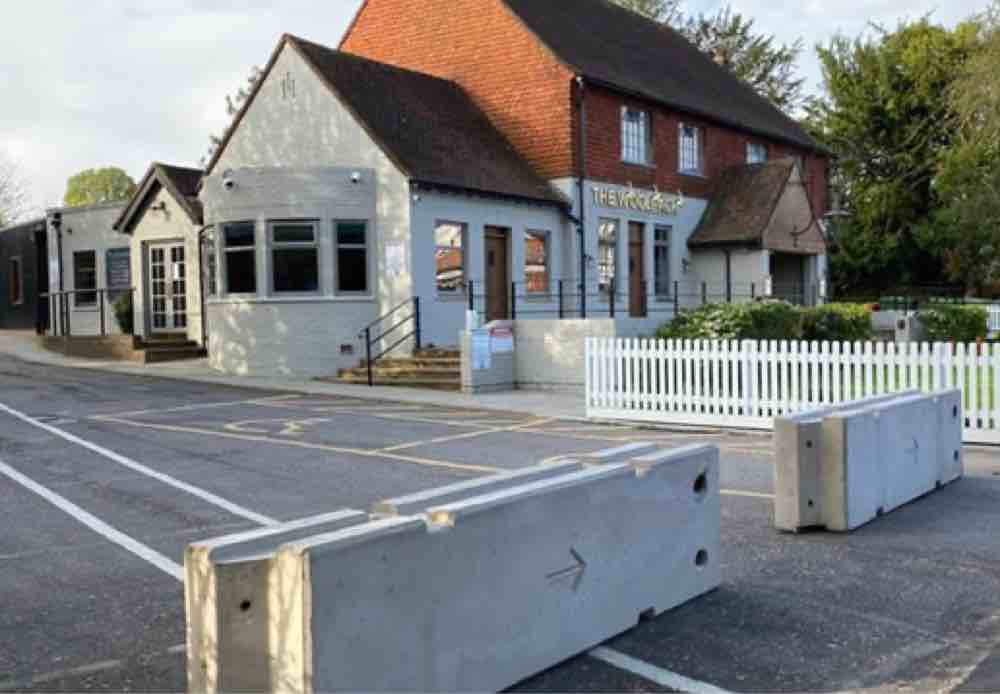 What Can Concrete Barriers Be Used For?

Concrete barriers are an effective solution that can be quickly implemented:

If you are a construction site manager or are managing a large vacant space, concrete barriers are perfect for preventing unwanted or unauthorised traffic from entering areas that may be unsafe. This can also protect open areas against illegal fly-tipping and unwanted guests inhabiting the land.

For demarcation or guiding of traffic

Where demarcation is required to determine where vehicles should be driven, concrete barriers make an excellent temporary solution that is both quick to install and remove after use. Controlling the flow of traffic in this manner is helpful in protecting pedestrians from passing traffic. Due to the sheer weight of the concrete barrier blocks there is no danger of them being moved either through the actions of drivers or through high winds.

Concrete barriers can be used to protect workers from passing traffic. When carrying out roadside maintenance, workers are often at risk from road users. Concrete barriers provide a versatile means of maintaining safety if used as traffic separators during road construction projects. 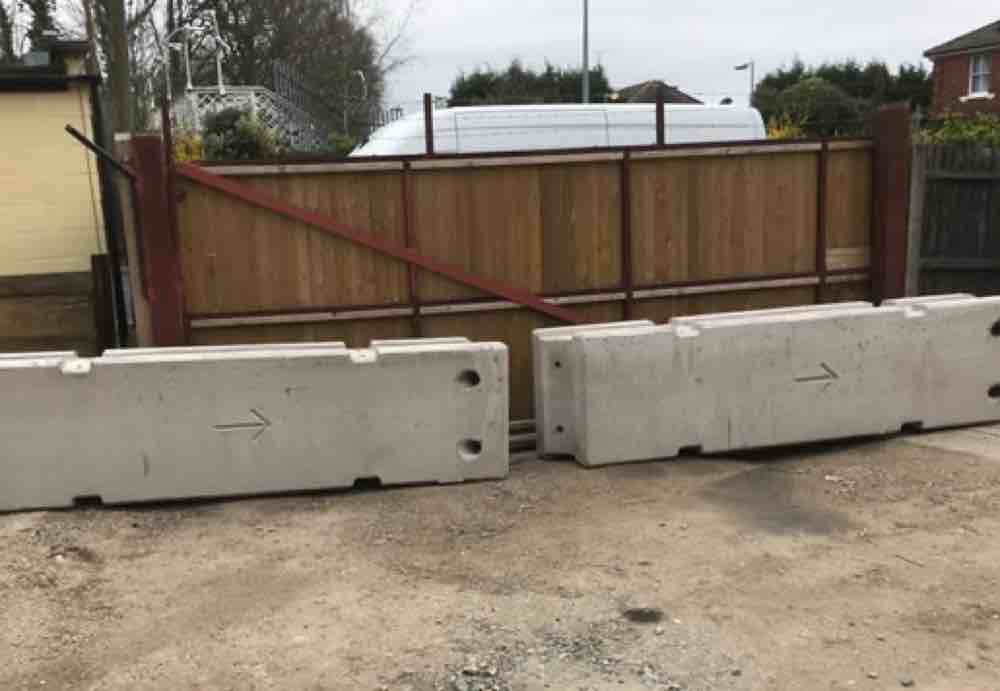 What Can Concrete Barriers Be Used For?

As a secure base for public events

For public events, concrete barrier blocks can be used to assist in creating walkways and blocking off areas that are not open to the public. They can also be used to provide a solid base for fencing that will stand up to large crowds better than fences would do on their own.

In the event of a flood, concrete barriers can be used to provide a first-line defence against rising water, massively reducing water flow. They can also be used to prevent traffic from entering waterlogged areas.

In the event of terrorist activities

Concrete barriers are a highly effective method of protecting vulnerable areas that may be subjected to terrorist attacks. Equally, they can be used to create a secure perimeter following a major incident or terrorist attack.

Where a business is under threat of ram raiders, positioning concrete blocks can act as a very useful deterrent.

What Concrete Block Solutions Do We Offer? 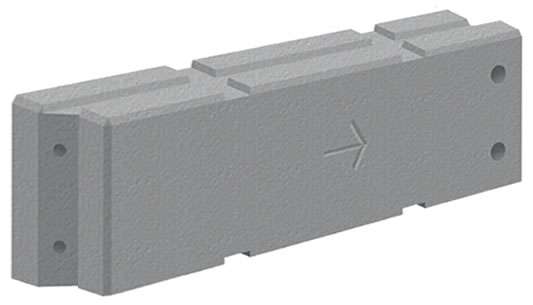 Temporary Vertical Concrete Barriers (TVCBs) are used to provide demarcation and a physical barrier to unauthorised entry. Clearway’s TVCBs are perfect for multiple applications such as securing wide entrances to land or car parks, protecting workers or even providing flood defence. They offer great versatility as they can be used as Vehicle Security Barriers (VSBs) as well as for Hostile Vehicle Mitigation (HVM).

Purpose-design to be effective and robust barriers, our TVCBs are manufactured from high-quality concrete and crash tested to withstand high vehicle impact, ideal for protecting road or construction workers and pedestrians.

Safe working environments for construction site and on highways where workers and the public can be in close proximity to high volumes of traffic, TVCBs are excellent traffic protection barriers and for providing perimeter security for private property. 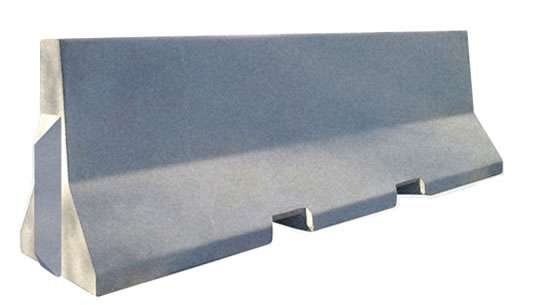 Jersey Barriers are concrete barriers designed to protect against high impact so are ideal for traffic management, specifically separating lanes of traffic, or to protect construction workers and pedestrians in the event vehicle collisions or crash into a barrier. Jersey barriers use an interlocking system so that you can fully secure a continuous perimeter of any length.

When Jersey Barriers are utilised as edge-protection around perimeters, they offer extremely effective protection against attempted intrusion with vehicles. If traffic rerouting and general traffic management are required during road works or other construction works, Jersey Barriers help to provide a safe environment for workers and pedestrians.

Our interlocking Jersey Barriers are manufactured and cast from high-quality concrete. With our lorry-mounted lifting arm and fork-lift option, they are quick and easy to install on your site. 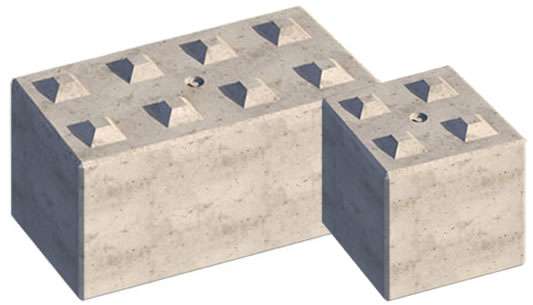 Interlocking concrete blocks are specially designed to stack both vertically and horizontally, creating a retaining wall of any size.

Despite their immense weight, they are quick to assemble and easy to install. With excellent fire and water-resistant qualities, interlocking blocks are a robust solution for protecting vacant properties, managing vehicle and pedestrian access or building custom storage bays and partition walls.

These blocks are referred to as retaining wall blocks because of the way they allow for secure stacking in any direction to provide solid, highly-effective wall structures or barriers that may be required for a wide range of projects.

Available a variety of sizes and weights, our interlocking concrete blocks can have 2, 4, 6, 8 or 10 nodes. These allow for an unlimited range of height, shape and length combinations for anything from storage systems, retaining walls, flood defence or erecting temporary structures.

Clearway draws from many years of operational experience to provide effective and reliable site security solutions. We are able to handle a wide range of security needs from concrete barrier hire to a full vacant property or construction site security service. We’re proud to have worked with a variety of industry-leading partners including water authorities, construction businesses, transport sites, and emergency services. 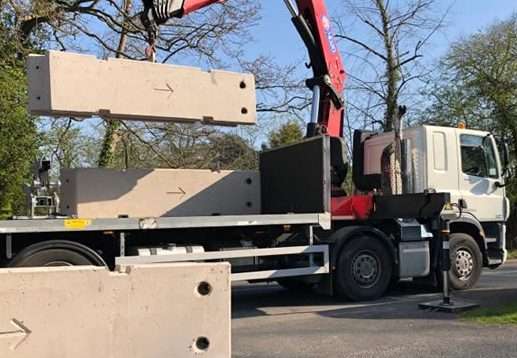 Clearway was called to secure a vacant site on the A5, north of Birmingham. The area had previously been home to an Indian restaurant but was soon to become a petrol station. The site had not long been vacant before trespassers had broken down the fence and had moved onto the land.

A lengthy eviction process ensued and the trespassers were eventually removed. We advised our clients that the Heras fencing currently in place would not be suitable for deterring future attempts.

Over the course of three to four days, the Clearway team erected 22 temporary vertical barriers to create a 77-ton perimeter that no vehicle looking to make an unlawful entry would be able to get through.

How many blocks can you deliver?

Individually, our lorries have the capacity to deliver 6 x 2.5 tonne blocks, or 10 x 2.5 tonne blocks with a trailer, at a time. Additional vehicles are engaged for larger installations to coordinate deliveries simultaneously. Fitted with both a hydraulic crane (crane unloading) and an integral Moffett M8 30.3 fork-lift truck (trailer unloading), we’re able to deliver and position concrete blocks pretty-well anywhere.

What concrete barriers do you offer?

We have both options available. In addition to our lorry mounted hydraulic crane, we use a Moffett M8 30.3 trailer mounted forklift. The Moffett M8 allows us to access hard-to-reach areas so we can supply blocks to the majority of areas on your site if the ground conditions are suitable. This forklift can get into places that the crane lorry cannot.

What concrete barriers do you offer?

We stock a range of concrete barriers to be used for a number of applications. We will have an initial discussion or site survey to establish your needs and discuss the best solution accordingly. Our barriers include precast, temporary, Jersey, interlocking blocks, and barriers with Heras fencing. Our experienced surveyor is able to preempt any potential risk and problems on the site and suggest an appropriate solution.

Concrete blocks are typically delivered during a normal working day, although deliveries frequently take place earlier or later in the day to help avoid traffic congestion. Our office is available during normal office hours but an out-of-hours service is available for emergencies.

Can you bolt your blocks together?

Wherever possible, concrete blocks should be positioned end-to-end and bolted together to provide the strongest, most stable barrier. However, bolting blocks together is only possible where the ground is flat and stable enough.  In the majority of cases, we will use M24 heavy-duty steel bolts, fitted inside the recesses of the blocks.

What is the weight of your blocks?

Our blocks range from 1 tonne to 5 tonnes however, the standard block we use for the majority of applications is around 2.5 tonnes. When the blocks are bolted together, they become increasingly difficult to move due to combined weight.

Do you deliver blocks nationwide?

Yes we do. We are based in Kent, in the south east, primarily providing delivery and installation across the south of the UK.  Where practical, we will work with trusted partners who comply with our standards and code of practice, delivering and installing concrete blocks across mainland UK.

Our sub-contractors are frequently audited by us, ensuring that each installation is completed to a high standard. As part of our quality control process, we photograph every installation and removal to ensure that we have delivered as per the specification and contractual agreement.

Blocks can look very industrial and unsightly, do you have any aesthetically pleasing blocks?

If you need a concrete barrier solution but don’t want to compromise the aesthetics of your site, we can offer concrete blocks with recesses in which you can place plants. Whilst the functionality remains the same, a planter would soften the appearance of the block and can be used as an aesthetically pleasing yet discreet security measure.

Where can the blocks be placed?

If you need a concrete barrier solution but don’t want to compromise the aesthetics of your site, we can offer concrete blocks with recesses in which you can place plants. Whilst the functionality remains the same, a planter would soften the appearance of the block and can be used as an aesthetically pleasing yet discreet security measure.

Will you offer a site survey before the installation?

Yes. In the vast majority of cases a site survey can be carried out using Google Earth/Street Map or clients will send photos to clarify the situation and requirement. As much detail as possible is obtained prior to installation as location and final positioning are critical, including the need to know if vehicle or pedestrian access is required. Our team will often spot areas of weakness and assess potential security risks you may not have considered.

Can I supplement the blocks with gates?

Yes. Customers often require full perimeter or entrance/exit physical security but with the ability to allow controlled access for vehicles and/or pedestrians. We supply and install our own, purpose-designed gates, in lengths from 3m to 4.5m, designed specifically to integrate with our concrete barriers. The gates will be delivered and installed at the same time the blocks are installed.

To discuss your perimeter security solution further or if you are not sure on which concrete barrier will be suitable for your needs, call us today on 0800 085 8695 or contact us via our contact form.

Contact our security experts now to discuss your security requirements and get a quote from us.