Golf Clubs Facing the Threat of Invasion from Travellers 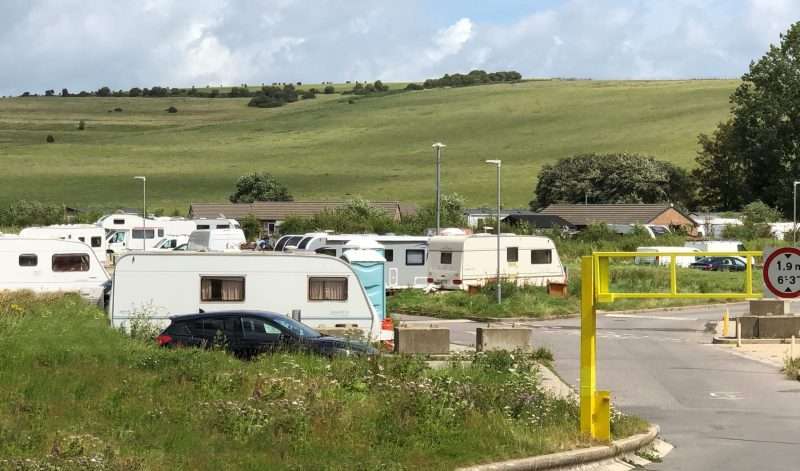 The past few weeks have seen a sudden upsurge in the travelling community trespassing onto the land of several golf clubs in and around the north west of England. Travellers are certainly not there for the golf.

The Royal Liverpool Golf Club at Hoylake, which hosted the British Open in 2014 and will again in 2023, was the target of such an invasion only this week, and the club was forced to close on July 25th and warn members to stay away while its staff tried to deal with the problem of uninvited visitors.

The club reported criminal damage to the clubhouse car park, and also that staff had been threatened and intimidated. Merseyside police attended twice during the evening, and a private security company was eventually called in to deal with the situation and assist with negotiations.

Just this week, Bidston Golf Club was forced to negotiate with travellers in order to get them to move on from their land, after the police and a local security company would not intervene.

Why has the north west suddenly found itself targeted by this menace? Most likely it’s because the famous annual Appleby Horse Fair, which was cancelled in 2020 due to the pandemic, is now set to go ahead from 12th – 15th August 2021.

The fair, in Appleby-in-Westmorland, near the Lake District, has been attracting members of the gipsy and travelling community from across the UK and Europe for some 250 years. Thousands have been known to attend this famous gathering which sees travellers gathering and making their way northwards from wherever they hail and setting up illegal encampments mainly in England’s north west. The widespread incidence of illegal land occupation is likely due to the police having limited the numbers that will be allowed to attend the fair, hence the need for landowners to exercise extra vigilance at this time.

How to secure your golf club or land
The Cheshire Association of Groundsmen, who are no strangers to this problem, recommends organising overnight security, or for whenever the premises is unoccupied, with instructions to call the police if damage occurs and to block any entrance. This way, you are not illegally detaining people on site as security can allow people to leave at any time, but you do not run the risk of any further travellers joining the group.

Situations such as that experienced by the Royal Liverpool are not unfamiliar, with similar events having been experienced not just recently, but over many decades, and on many accessible open spaces both publicly and privately owned. The desecration of land and property, and the unsavoury litter left behind when the vehicles leave, tends to be horrendous and is distressing, costly and time-consuming to clear and repair.

A smart option to consider is the installation of temporary CCTV towers to monitor vulnerable access points and provide advanced, remote notice of potential trespass situations. Clearway’s CCTV towers are powered by high-capacity batteries that are charged via integrated solar panels, which would be essential given the likelihood that mains power will not be available across the land to be protected.

Wireless perimeter alarms and remote CCTV cameras are ideal in situations where large, open spaces are vulnerable to illegal occupation. Don’t think about the cost of such measures, think about the cost and headaches of dealing with the problem if your site gets invaded.

If despite your best efforts you still fall victim to an illegal traveller encampment being set up on your golf course or land, your only option will be to engage enforcement agents from a dedicated, nationwide trespass response team.

Where Will the Thousands of Travellers Go As They Head South?
According to Government statistics, in the January 2020 Traveller Caravan Count, there were 356 transit pitches provided by local authorities and private registered providers in England and Wales.

Whilst the number of sites provided was an increase of 41% from the January 2010 Traveller Caravan Count, it begs the question as to whether 356 sites is anywhere near enough when you consider the scale of the geographical area covered.

As the Appleby Horse Fair ends and thousands of travellers begin their journey home, where will they all stop as they head south, especially those returning to Europe, with so relatively few transit sites available? It is little wonder they end up on private or local authority land and disrupt the everyday life of local residents.

The Appleby Horse Fair runs from 12th – 15th August, so right now, in the run-up to the event, this is a highly vulnerable time for landowners. As the old sayings go, forewarned is forearmed, and don’t shut the stable door after the horse has bolted. Be proactive now and over the coming weeks and months. Seek professional advice and put security in place ASAP, either using canine guard patrols or power-independent CCTV towers and alarm systems or both, to protect your valuable land. Should you fall victim to illegal entry, read more about our traveller removal services here.